If you are a vision system designer who has worked with line scan cameras, you may have heard the terms ‘halo’ or ‘halo effect’ used when talking about image quality. Let’s take a quick look at what this means and how this issue can negatively affect the operation of your system unless you know how to properly address it.

What is ‘halo effect’?

Halo effect is referred to as the distortion of image dimension, where the object contours appear with false color in the transport direction. This occurs when a multi-line color line scan camera (trilinear or quadlinear) is placed in an off-axis viewing angle causing each line on the sensor to have a different focal length and focal plane to the target. It can also appear when the sequential capture of the different line colors is impacted by external factors such as vibration or change in orientation of the detecting object, triggering each line to capture a slightly different view of it. The halo effect limits the accuracy of an object’s edge definition, which can result in misinterpretation during inspection.

When halo will most likely occur

Inspection of variable object speeds or rolling objects
Bulk or belt sorting applications such as fruit or bell pepper sorting involve objects moving at variable speeds. When there are slight changes in the position or orientation of these rolling objects as they travel on a conveyor belt, the spatial compensation algorithms cannot account for such random changes. This results in image distortion or inaccuracies in pixel data, causing the formation of color fringes known as halos.

Another example involves free-fall sorting applications such as tea leaves or grain sorting, when the speed, position and orientation of the object changes during free-fall, causing pixel offsets as lines are captured sequentially. 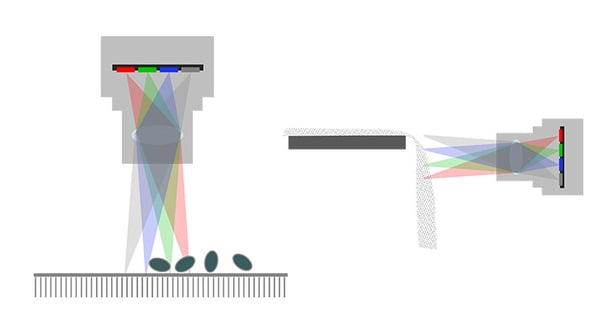 Halo effect will likely occur with applications that involve bulk/belt sorting and free-fall sorting applications which involve rolling objects or those with variable speeds.

Inspection of objects with speed variation or undulation in web inspection
For high speed inspection which is typical for web applications such as plastic, metal foil or paper, the presence of vibration can potentially cause slight misalignment of color bands. As compensation algorithms rely on consistent speeds and angles, a variation in this will produce image registration issues - the halo effect. 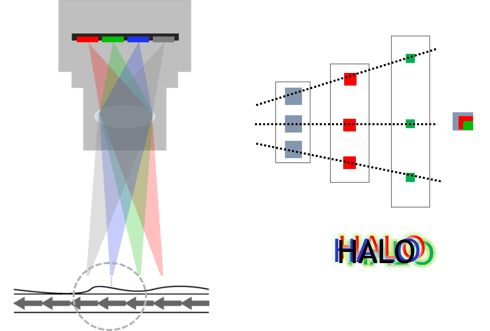 The presence of speed variation and vibration that is typical for web inspection applications can potentially cause slight misalignment of color bands and produce image registration issues known as “halos”.

Using prism-based cameras
If your application involves inspecting objects where the speed, motion and trajectory is largely unknown such as food, granular waste sorting, lane or belt sorting, then prism line scan cameras might be a better solution for you.

What are prism based cameras? These are cameras that have three or four separate line sensors mounted to a prism block and aligned so they have the same optical plane through a common optical axis. Unlike the sequential capture of lines in a trilinear or quadlinear camera, the color filter coatings on the prism simultaneously split the incoming light into separate wavebands for each sensor. In other words, they take one line at a time and split this internally, so variations in speed have no effect on the quality of the color data captured because all three lines will still have the same length on the target. Similarly, if objects change in orientation, the single optical plane in prism cameras ensures that each pixel on each sensor is focused on exactly the same point at all times and is therefore able to create a clean image. 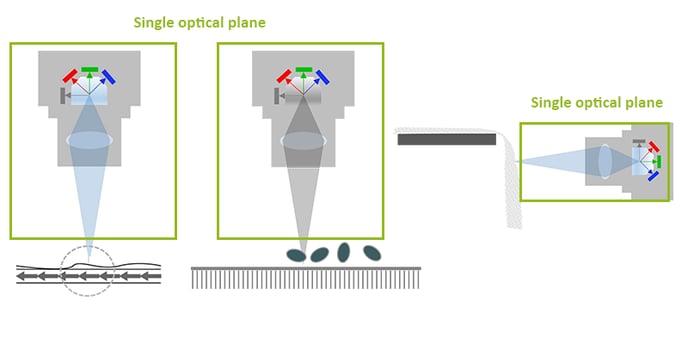 The single optical plane in prism cameras ensures that each pixel on each sensor is focused on exactly the same point at all times, to create a clan image.

Spatial compensation, which is a standard function in most trilinear and quadlinear cameras, is a pre-set adjustment that remains fixed once it has been set. This will work perfectly in situations where the object’s speed, distance and orientation remain consistent, for example in some web inspection applications where the target is flat and speed changes or undulations are minimal. However, do note that in applications where there is variable speed, position or orientation such as inspection of free-falling or rolling objects, a fixed spatial compensation setting will not work as effectively.

In our recent free on-demand webinar, we have demonstrated how spatial compensation can be applied to reduce the halo effect for some types of web inspection. If you are interested in learning more, and about other key considerations when choosing a line scan camera for your vision system, you can check it out here.

Also watch part 2 of our webinar on line scan technology, where we demonstrate 3 key camera tools that you can use to address common challenges in high speed applications. Register for on-demand webinar here.

Contact JAI for help:
Let us help you to find the perfect camera to meet your application requirements for high speed line scan applications.
Contact a JAI engineer

How to fix lens vignetting