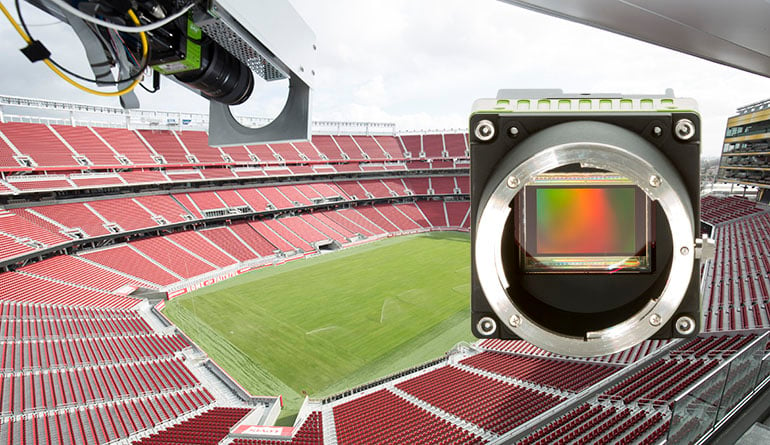 Camera technology has been an important part of the sports world ever since the advent of television. Large, broadcast cameras have become a familiar sight at most sporting events enabling sports fans to enjoy the action from thousands of miles away.

At the same time, machine vision cameras have become commonplace in industrial, medical, scientific, surveillance, and many other applications essential to our everyday lives. For many years, these two worlds – sports and machine vision – had little in common. But not anymore.

Today, machine vision cameras are being called upon to work alongside or in concert with broadcast cameras in order to support a wide range of related capabilities and applications. In some cases, these become part of the broadcast.

New 3D replay systems utilize as many as 42 machine vision cameras positioned around a stadium to feed images to powerful image processors that reconstruct stereoscopic 3D views of the action which are then added to the live broadcast. Other systems use multiple machine vision cameras mounted together on a single “head” to generate 360-degree views from within the action itself. This is then fed to viewers via virtual reality headsets to totally immerse them in the sporting experience.

Watch a range of examples of 3D replays in soccer.

Beyond the actual broadcast, machine vision camera technology is also widely used in player and ball tracking, sports training, play monitoring, as well as stadium and crowd management. Tracking player movement and relevant parameters such as play technique and game strategy gives coaches (and sometimes broadcasters) a valuable tool for overall game analysis. The image data and meta data such as time on field and distance covered can be used for player performance analysis.

The Intel system deployed at the Super Bowl utilized 36 of JAI’s Spark Series SP-20000 20-megapixel cameras mounted around the upper level of the stadium to continuously capture the action from every angle.

Apart from monitoring the sport and the players, the use of machine vision cameras for stadium and crowd management is rapidly increasing. Cameras assist in managing a stadium´s capacity by efficiently managing the crowd seating arrangements, avoiding crowd congestion, studying crowd flows and monitoring crowd behavior. In games such as football (soccer) where hooliganism is rampant, using vision technology helps to identify behavioral patterns of crowds which helps to efficiently implement safety procedures (e.g., evacuation in the event of emergencies). Adding back-end intelligence to high quality imaging helps to statistically quantify crowd satisfaction, enable facial recognition, and in return improve visitor experience.

The challenge in selecting the right camera for a sports application typically starts with camera resolution and frame rate. In player and ball tracking, as well as crowd/stadium management, the task is to capture as many details as possible. This task typically requires high resolution.

4K horizontal resolution has been around for more than a decade. 4K, also known as Ultra HD, has a pixel resolution of 4,096 x 2,160 pixels. When compressing video streams from 4K to HD streamable video the images are clearer, sharper and cleaner. Shooting at such a high resolution gives editors and image processing engineers an opportunity to zoom far into images and reframe without losing information.

Using an 8K horizontal resolution, also known as Full Ultra HD allows the user to zoom in twice as much and still get the 4K image. Being able to film in such high resolutions allows for more control and freedom during production, image processing, and post-production than ever before. But it is important to have the right trade-off between resolution and frame rate. 8K horizontal resolution at 60 FPS is the new trend which some of the latest machine vision cameras can support.

Another key requirement for cameras used in sports and stadiums is reliable data transmission at low noise levels over long distances. Sporting venues are typically quite large and cameras may need to be placed throughout the venue. CXP and optical interfaces (e.g., SFP+) are reliable and well-known interfaces to handle both the distances and the environmental conditions of outdoor applications.

The fact that most sports are conducted outside also means that the cameras must be able to accommodate varying illumination conditions. Even with the perfect exposure, there are certain scenes that will always tend to get blown-out highlights, flat shadows or both. On-camera High Dynamic Range (HDR) can help to balance out these differences and output images with well-defined linearity across all the grey levels. Such features can greatly reduce the image processing resources required to generate an acceptable image.

One other camera requirement created by the outdoor environment is the ability to dynamically control the amount of light reaching the image sensor along with the ability to change focal length depending on the distance to the player and surroundings that are to be viewed. Since many of the player tracking, crowd monitoring, and 3D replay cameras are fixed-position cameras with no human operators, it can be very advantageous to have the ability to send lens control commands remotely via the camera’s control interface.

Watch webcast:  A look at the key imaging features of the new Spark Series 45-megapixel camera

A camera partnership sets a new benchmark in multispectral imaging

Bank note inspection: Show me the money…in color and multispectral!