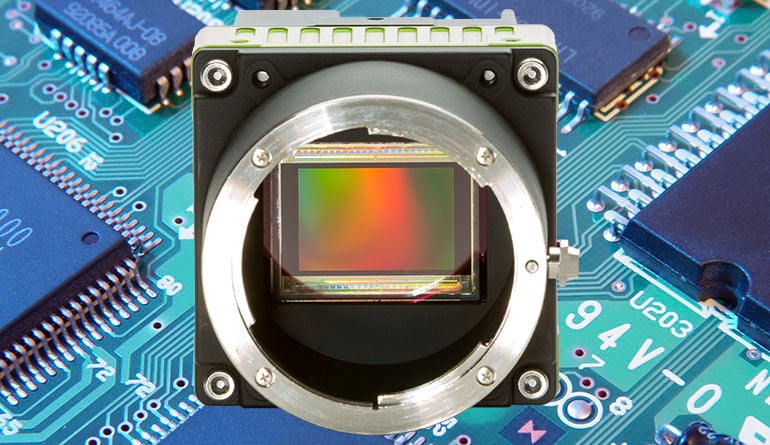 Now available are two new variants of Spark Series 45-megapixel cameras, supplementing the original 45- megapixel area scan cameras introduced recently. The new SP-45001M-CXP4 (monochrome) and SP-45001C-CXP4 (Bayer color) offer the same 8192 x 5460 resolution (44.7 megapixels) as the SP-45000-CXP4 models, but use a reduced-speed version of the CMOS global shutter imager resulting in a list price that is approximately 20 percent below that of the full-speed models.

With a maximum full resolution frame rate of 38.67 fps for 8-bit images and 32.23 fps for 10-bit or 12-bit images, the SP-45001-CXP4 cameras provide ample speed to support a wide range of high resolution applications where the ultra-high performance of the original models is not required. (The original models – SP-45000M-CXP4 and SP-45000C-CXP4 delivers up to 52 frames/s).

The lower price point enables vision system designers to maximize the cost competitiveness of their systems, especially for applications such as inspection of flat panel displays, semiconductors, PCBs, and other systems where multiple high resolution cameras are often utilized.

The SP-45001-CXP4 cameras deliver the same excellent image quality as the original models thanks to a dark noise rating of only 4.5 electrons and a standard dynamic range of 67 dB. A special built-in High Dynamic Range (HDR) mode that uses a dual gain technique applied to a single captured image, boosts the dynamic range to 73 dB with a full resolution frame rate of 16 fps regardless of bit depth. HDR output can be delivered in a 14-bit linear format, or in a knee-point compressed format at a bit depth of 8, 10, or 12 bits. (More detailed information on HDR imaging is provided below).

The SP-45001-CXP4 models feature a four-lane CoaXPress interface for efficient connection to the host.  In applications with large data amounts and the need for heavy data processing, the SP-45000 supports two types of parallel processing/data sharing modes. One option is to have a duplicate setup mode where the full frame can be shared between two image processing stations at different locations. A second option is to share data processing on up to four different servers. (More detailed information on Parallel Processing is provided below).

For low-speed applications, image quality can be further enhanced by using the camera’s built-in frame integration capabilities to average up to 8 consecutive frames, thereby reducing shot noise in the image.

The image sensor has 3.2-micron square pixels and a diagonal of 31.5 mm (Super 35 mm format). This enables the SP-45001-CXP4 cameras to fit into a compact 62 x 62 x 84.2 mm form factor.
Other key features available on both new models include single- and multiple region-of-interest (ROI) capabilities, horizontal and vertical image flipping, an edge enhancement function, a sequencer trigger function, automatic level control combining auto-shutter and auto-gain capabilities, and a built-in function for controlling lenses connected via a Birger Mount.
The SP-45001-CXP4 cameras accept F-mount lenses. 1x2, 2x1, and 2x2 binning is supported on the monochrome model.

In High Dynamic Range (HDR) scenes there are so much contrast that it may be difficult or impossible to find an image exposure time that keeps the bright areas from over saturating while also keeping the dark areas from simply turning to black.

Such scenes are typically found in applications like electronics inspection or metrology where we have both shiny and dark components, or glare on metal parts but it can be just as difficult in outdoor applications I mentioned where we have sunlight and shadows to deal with.
To overcome these challenges in vision applications, the new JAI 45 MP camera supports different methods of calculating an HDR image.

One method is based on a dual gain, single exposure where the two separate analog gains can be applied to the converted electrons on the floating diffusion gate. On the camera, these high and low gain 14-bit linear format images are combined to stretch the dynamic range, providing values to pixels that might have otherwise saturated or fallen into blackness.

Another way for dual-gain images is to have the 14-bit HDR information compressed into 8, 10 or 12 bits. The compressed HDR is based on knee point settings. The 45 MP gives the user the ability to define a single knee point based on the percentage of exposure time and percentage of saturation voltage (fill level), and the rest of the 14-bit data is then “bent” or compressed at this knee point to fit within the available bit depth.

This example shows the dual-gain HDR function. The picture to the left - with the HDR function off - has trouble with the exposure. The calendar on the wall next to the window is too dark and the scene outside the window is over saturated. In the image to the right the HDR knee point function is used to increase the exposure on the calendar while also significantly improving the exposure of the cars, house, and hills outside.

More about Parallel Processing/Data Sharing:
In a standard configuration, the camera is connected to a CoaXPress frame grabber and when running at full speed, all four CXP lanes are occupied and deliver digital image data (up to 18.6 gigabits of data per second) to algorithms performing image enhancement, features extraction, classification, and more.

But this is a time-consuming process, and when there is a large amount of data – such as in a high resolution application – it is this processing time that becomes the limiting factor, rather than the speed of the camera. To address this, parallel data processing provides an efficient and convenient way to solve the challenge.

The Spark SP-45001-CXP4 cameras support load sharing on up to four different servers.

The SP-45000 supports two types of data sharing modes. You could either have a duplicate setup mode where the full frame can be shared between two image processing stations at different locations. In this case, the max. achievable speed of data transfer is half of the full speed capability for the full frame. In numbers this would be 25 Gbps per duplicate transfer.

The second type of data sharing that the 45 MP supports is load sharing on up to four different servers. These four data streams to individual servers need not be the same region of interest or the same frame. The frame can be divided in up to four ROI´s and each ROI can be sent to a specific server location over dedicated data streams.

Also, 3D modelling and photogrammetric applications which may not require the fastest imaging speeds but involve quite heavy data processing tasks such as extraction of 3-dimensional data from a 2-dimensional image by extracting and quantifying color, reflections and angular perceptions.

Depending on your requirements, having a camera with this type of data sharing capability can make a big difference.